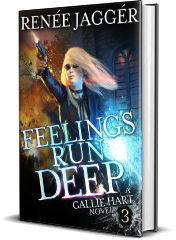 At least Callie doesn’t have to worry about getting her security deposit back.

Why has Vaughn been in such a rush to kill her? Is he afraid she can persuade the Winter and Summer courts to work together? After all, if the courts don’t unite, the vamps will destroy them all. Shouldn’t that be motivation enough?

Callie will just have to persuade them to cooperate anyway.

It will be a bit harder to do that from the dungeon where the Winter Queen promised to toss her.

Has Vaughn finally outwitted them all?

What can Callie do to stop the slaughter?