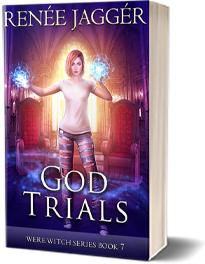 Bailey Nordin took care of the witch goddess and accidentally became a goddess herself.

Did you know there was a training camp for gods, demi-gods and other powerful beings to teach you how to control your powers and have some stability?

And she didn’t expect to be observed by gods and goddesses while she was training.

Nothing is as it seems. Good thing Bailey is a quick study and won’t hesitate to defend herself when needed. Someone is playing a much bigger game here.

But Bailey isn’t the only one with her hands full. Roland and Carl are trying to find out what is happening to the missing witches.

And it’s nothing good.

Bailey and Roland might not be in this situation together, but they have allies backing them.

“It’s like Romeo and Juliet…a Were and a wizard fighting kidnappers, gods, and a mysterious government agency that is trying to hide the paranormal from society. You know what? It’s actually nothing like Romeo and Juliet. Except no one wants those two together, especially the witches.”

Will Bailey survive the trials and ascend to goddesshood? Get your copy today to find out!