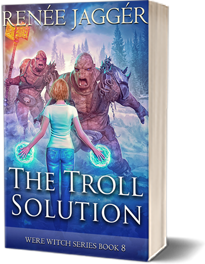 And it’s a lot harder when everyone is trying to use you as a pawn in a cosmic chess game.

What doesn’t kill you makes you stronger. But what if that’s what Fenris wants?

This time, it’s not only Bailey’s life on the line.

Everything she knows and loves, including her, will be gone if Fenris succeeds in bringing Ragnarok about. You know, the end of the world as we know it?

Things are getting really complicated really quick, especially with that lingering witch problem.

Can Bailey and Roland play along long enough to turn the game against Fenris? Or will one of them be sidelined while the other one is checkmated?

“It’s like Romeo and Juliet—a Were and a wizard fighting kidnappers, gods, and a mysterious government agency that is trying to hide the paranormal from society. You know what? It’s actually nothing like Romeo and Juliet, except that no one wants those two together, especially the witches.”

Go up and click Buy Now or Read for Free and join Bailey as she learns how to think like a goddess.