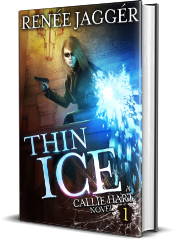 How many secrets does the Army hold? At least one that concerns me, which I found out after they decided I was unnecessary.

That advice about telling the truth? It’s highly overrated.

They say there is a point where you can’t go anywhere but up. I have to think guarding an underwear factory is such a point after running ops in the Sandpit overseas.

Besides, wouldn’t you get the heebie-jeebies walking around in a warehouse full of scantily clad plastic body parts carrying nothing but a flashlight?

Yeah, I thought so.

That first fight was vicious, short, and terrifying, and what I killed turned to ash…

Circumstances force me to accept a job (very recently vacated due to Ash-Boy) guarding the body of a jet-setting male model. He knows what the Army is hiding…

This might work. Well, if I can keep from applying my brand new two-inch heels to my potential boss’s ridiculously toned picture-perfect posterior.

Let’s face it. Can anyone see me keeping this job?