Too Much Magic: Were Witch Series Book 3 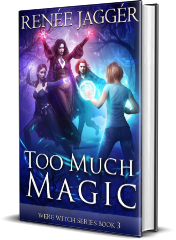 How far would you go to believe innocents when it seems all witches are trying to kill you?

The worst of the Witches group seem hell bent on capturing or killing Bailey and capturing the guy she is interested in.

THE MIB team is trying to calm the situation down, but no one supports them.

Well, Bailey is trying, but who is asking her opinion on the matter?

Fenris is playing a game. But who is the game going to help if he wins?

Unfortunately, when gods get involved it seems humans, weres and witches are merely pawns in the game.

Bailey isn’t too fond of the game, but for now she needs help.

Go up and click Buy Now or Read for Free and join Bailey as she learns just how unique she is, and why the gods might want her.