Were Rages: Were Witch Series Book 5 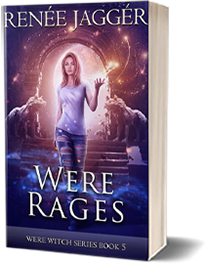 You want war? You got it!

The Venatori are bringing battles and Bailey has to step up.

The question isn’t is she willing, but rather can she do what needs to be done?

The government group is trying to stay neutral, but will they have a choice?

Somewhere in the background, Fenris is moving pieces that affect the future of the world.

In the end, they are going to push Bailey’s hand.

“It’s like Romeo and Juliet…a Were and a wizard fighting kidnappers, gods, and a mysterious government agency that is trying to hide the paranormal from society. You know what? It’s actually nothing like Romeo and Juliet. Except no one wants those two together, especially the witches.”

Grab your copy today and join Bailey as she learns just how unique she is, and why the gods might want her.