Were War: Were Witch Series Book 4 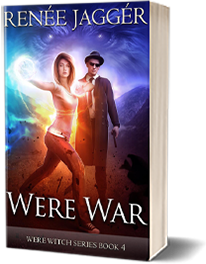 Everyone has been on Bailey’s back as she tries to understand her powers, her attitude, and her future.

Now, the gods are getting involved.

Not sure where the next attack will come from, Bailey is doing the one thing she can control: practice.

But will all of the practice Fenris is pushing be enough for the game she is in?

Especially when no one is divulging the rules.

The being behind it all who is pulling the strings has one massive misunderstanding. Just because you have a good heart doesn’t mean you’re weak.

“It’s like Romeo and Juliet…a Were and a wizard fighting kidnappers, gods, and a mysterious government agency that is trying to hide the paranormal from society.
You know what? It’s actually nothing like Romeo and Juliet.
Except no one wants those two together, especially the witches.”

Grab your copy today and join Bailey as she learns just how unique she is, and why the gods might want her.