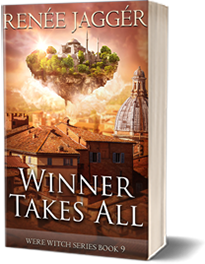 Bailey’s been asked to stop the Norse apocalypse. No pressure, right? What’s a goddess to do?

Perhaps the most important thing she can do is not get killed.

Next up, stop Ragnarök from happening.

Fenris is making his move, setting up attacks and putting plans into motion that all lead to the final big play.

This time, he’s playing for keeps, and no one is positive how it’s going to end.

How many gods will fall to Fenris? Will Bailey inadvertently take the wolf-father’s place as the ritual sacrifice, or will Bailey, Roland, and the Norse pantheon prevent Fenris from starting Ragnarök?

The newest goddess has some tricks up her sleeve. Better hope they’re enough.

It’s like Romeo and Juliet…a Were and a wizard fighting kidnappers, plus gods and a mysterious government agency that is trying to hide the paranormal from society. You know what? It’s actually nothing like Romeo and Juliet, except no one wants those two together, especially the witches.

Get your copy and join Bailey, Roland, the Norse gods, and more in the epic conclusion of the WereWitch series!